The circus enables the children who join, often 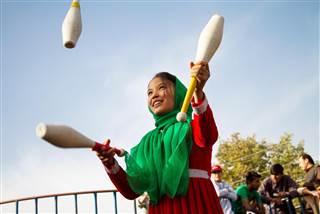 from internally displaced communities around Kabul, to learn new skills while continuing their education. Nadia, seen here, is 14 years old, and one of the best girl-performers in the country. Ashley Hamer / UNICEF

“We are trying to build trust and momentum around why we need to vaccinate our kids,” said Melissa Corkum, UNICEF team leader on polio eradication.

UNICEF has teamed up with a local group called the “Afghan Mini Mobile Circus for Children” to help lure every last mother and child to get their monthly dose of polio vaccine.  And there’s nothing like a circus to attract kids.  Children flock to the circus the moment they see youngsters their own age pull out their juggling pins according to Fardeen Barekzai / UNICEF.

“In many of these communities there is not a lot of entertainment,” said Corkum, who’s helping head up a vaccination drive this week in Jalalabad, in eastern Afghanistan. The Afghan Mini Mobile Circus finds children in a community and trains them in simple circus skills like juggling. “It’s pretty basic. There’s no tightrope walking or anything like that.”

After training, they put on a show. Embedded in the show is a lesson about polio and vaccination. The polio virus is played by a child dressed like a monster, often a snake. Vaccination volunteers conquer the monster.

“It draws a crowd of people around the performance,” Corkum said. “While that performance is taking place, polio vaccinators are moving around in the crowd, vaccinating children.”

Inventive approaches like this have helped the Global Polio Eradication Initiative, led by Rotary International, reach hundreds of thousands of children.

If it works, polio would become only the second disease ever to have been eradicated by human intervention. The first was smallpox, driven out of existence by a vaccination campaign in the 1970s, and declared eradicated in 1980.  “We are really close,” Corkum said.

“Polio now survives only among the world's poorest and most marginalized communities, where it stalks the most vulnerable children,” the World Health Organization says. “Polio cases have decreased by over 99 percent since 1988, from an estimated 350,000 cases then, to 37 reported cases in 2016. As a result of the global effort to eradicate the disease, more than 16 million people have been saved from paralysis.”

Why it's hard to eradicate?

In June, public health groups and non-profits pledged $1.2 billion to help finance a final push by the Global Polio Eradication Initiative.  Polio is hard to eradicate because it lives and multiplies in the human gut, and so it can be spread in sewage.

“There’s no going back if a child is affected by polio,” Corkum said. About one in 200 infections cause permanent paralysis and 5 to 10 percent of those paralysed die when the muscles that aid breathing stop working.

Children in developed countries like the U.S. are protected after four doses of vaccine. But in developing countries where polio is still a risk, kids need many more doses than that, Corkum said. They have weaker immune systems, thanks in part to malnutrition, and they’re more likely to be exposed to the virus.

The easiest polio immunization to deliver is an oral vaccine, given as a few drops into the mouth. It’s made using a live but weakened version of polio and it can sometimes persist in a child’s digestive system, getting into sewage. Sometimes, it mutates back into an infectious form.

“On rare occasions, if a population is seriously under-immunized, an excreted vaccine-virus can continue to circulate for an extended period of time,” WHO says.

“The longer it is allowed to survive, the more genetic changes it undergoes. In very rare instances, the vaccine-virus can genetically change into a form that can paralyse. This is what is known as a circulating vaccine-derived poliovirus.”  It’s rare, but turns polio vaccination into a far more challenging project than it otherwise would be. There have been 24 outbreaks of this vaccine-derived polio strain, causing more than 700 cases.

But over that same time, most than 10 billion doses of oral vaccine have been given to 3 billion kids.

“As long as a single child remains infected, children in all countries are at risk of contracting polio. Failure to eradicate polio from these last remaining strongholds could result in as many as 200,000 new cases every year, within 10 years, all over the world,”  WHO said.

Corkum described watching the street circus in Jalalabad last year.  Hamid, clutching his precious box of vaccinations, attacks a snake that represents polio during the performance. The crowd cheers. "Vaccinating your children will destroy this disease!" cries Hamid. "Make sure your whole village takes these droplets and you will see how strong your children can be."   And volunteers will be going house to house in other areas, talking with mothers to encourage vaccination.

It’s notoriously risky and difficult work. Afghanistan and Pakistan both have some of the most extreme terrain in the world, with villages tucked into high mountains with no road access, or cut off by constant fighting.  “We can’t risk getting in the line of fire,” Corkum said.

“There are many different types of fighting activities that take place of Afghanistan every day between various groups. There are a lot of different tribal back and forth.”

In Pakistan, while vaccination teams have been directly targeted in recent years, they can be in the wrong place at the wrong time. The militant Islamic Taliban once blocked access to some areas for more than a year, and attacked some volunteers giving vaccines, although global Islamic leaders now encourage vaccination.

But with efforts like circuses, door-to-door visits and grabbing refugees at checkpoints, UNICEF, WHO, Rotary International and other groups leading the effort hope the end is in sight.

Microsoft co-founder Bill Gates, whose Bill & Melinda Gates Foundation helps pay for polio vaccination efforts, predicts the end is near.  In 2017, Bill stated:  "If things stay stable in the conflicted areas, humanity could see its last case of polio this year”.