Murray was a much loved Honorary Member who served as President and Secretary of our Club.  He was active in every facet of the Club. His most often felt activity was to help in "Dads Army" and  to farewell all those attending.  We missed him when he stopped attending due to diminishing memory which seemed to be accelerated when his daughter Jo, a past member of our Club, passed away from cancer.  Murray has been in aged care for some time now.

You shared my life and troubles, the laughter and the tears. You gave me loving friendship, through all the loving years Out of all the many blessings received along life’s way, There was no gift more treasured than you and our yesterdays.

Thank you for the years we shared The love you gave, the way you cared In our hearts you’ll always stay Loved and remembered every day"  Publication: Herald Sun

The private funeral service for Murray Campbell will be live streamed on Tuesday, November 24, 2020 at 11.30am.

To access the URL link please go to: monkhouse.com.au/tribute-centre/

In lieu of flowers, donations may be made to NeuRA Foundation. https://foundation.neura.edu.au/murraycampbell/

Postcript from Peter Washusen who summarised with:  "Murray was a true gentleman, devoted family man and Rotarian and a compassionate friend who has left us, but great memories remain."

At the Windsor, John Mitchell and Murray Campbell overseeing the Raffle with Gerald Ashman! 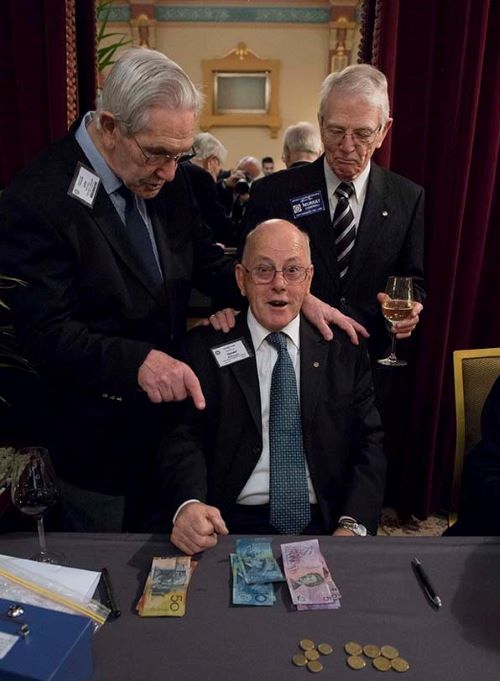 Held as Obit will be much the same

Murray Campbell has been a member of the Rotary Club of Melbourne for 25 years and during that time he has served in almost every office and every capacity the Club offers. He is extremely well-known around the Club; he might even be described as notorious. Rarely does a meeting conclude without some evidence of his cheeky sense of humour enlivening our day.

All members excepting our very newest know Murray well and are proud to call him a friend. Time does not permit an appropriate review of his extensive history and great achievements with the Club so this is just the tip the iceberg so to speak.

Murray was inducted into the Club in 1987 with the Classification Medical and Hospital Funds. He was then Executive Director of Manchester Unity Group. He was a member of the Host Club Executive Committee for the 1993 International Convention held in Melbourne and served as Chairman of its Finances Committee. Murray was President of the Club in 1996-97.

He was recognised by the Club as a Paul Harris Fellow in 1999 and to quote from the citation: “Murray was a natural to be a great Rotarian and he was quickly a participant across the Club’s activities”. Words as true today as when they were written last century! Murray was the Secretary 2003-05, a most unlikely role for a Past President and this is just more evidence that Murray will serve wherever he is needed.

The Club Annual Report attests to the success of his Presidential Year however there is more. It was during this year that Murray christened the Luncheon Organising Committee ‘Dad’s Army’. Murray has since taken over as Chair of the committee and still calls it Dad’s Army although Grandad’s Army might be more appropriate now. More significantly it was on his watch that alcohol was introduced to Club meetings after 75 years as a 'dry' club. It occurred following the move from the ANZ Pavilion to the Naval and Military Club where Members had to pass the bar to get to the meeting. While Murray did nothing to encourage Members to pick up a drink, he certainly did nothing to discourage it!

Murray has been the consummate Secretary. Besides being Club Secretary, he was Secretary of the Rotary Club of Melbourne Community Foundation, the International Committee and the East Timor Committee. He took on the responsibility of Company Secretary of the newly established East Timor Roofing Holding Co Ltd until all necessary formalities were finalised and the Company became a legal entity. He served for three years as Secretary of the District 9800 RAWCS Committee.

He was involved in establishing SecondBite at the Queen Victoria Market and compiled the roster for three years. He is a regular worker at the DIK Store. Finally it is important to recognise Murray’s unwavering support of the Rotary Office. Murray is always there to provide support, give insightful and helpful advice and even get his hands dirty
when reorganisation or packing is needed.

Murray Campbell is one of those very special members who give the Club a heart and a soul. You may only see Murray once a week but he makes you feel like you are part of a family. He is the glue that makes this club special. Murray, you truly are a natural to be a great Rotarian, we commend your commitment to the Club and the achievements you have
contributed to over the last 25 years and it gives us great pleasure to recognise you as a Paul Harris Fellow with Double Sapphire.