The 21st April 2021 signifies the celebration of a 100 years of the Rotary movement in Australia, namely the chartering of Club “Number One”, the Rotary Club of Melbourne.

Our club, the Rotary Club of Bacchus Marsh is a direct descendant of Melbourne, chartering in 1955. On our club’s 30th Anniversary in 1985, our charter President Ernie and a couple of mates laid down a “modest” amount of Liqueur Tawny Port.........Interested? Read on.

This is the unofficial story of “Ernie’s Lost Barrel”

Like all good tales this one is mostly true!

There are two things in Rotary life that are for certain:

The latter was especially true for one such President, who just happened to charter our club. Now Ernie was a good, knockabout bloke. He and about 20 other local “larrikins” thought it was a good idea to charter the "new" Rotary Club of Bacchus Marsh way back in 1955. The club soon prospered, attracting members from all walks of life, delving into all aspects of the community, revered in town as "Men of Action"!

The sixties rolled on, through the seventies and into the early eighties. Club fundraising was becoming increasingly difficult, but Ernie, always finger on the pulse and an eye on the look out for an opportunity, turned to our local talented Moorabool vintners. From 1981 to 1985, a small band of Rotarians, PP Ernie at the helm, would religiously spend a Sunday morning each month wine bottling, with most of the "demon" making it into some bottles. Not content with just bottling and selling “plonk”, they decided to broaden their horizons and look to the future.

Ernie could hardly believe his luck! Securing a 50 year old Spanish oak barrel, they procured the services of a “youngish” vintner (he was a lot younger in 1985!) who was beginning to specialise in fortifieds. His reputation as a vintner would grow in the ensuing years but our “young “ vintner then filled Ernie’s 50 year old barrel with about 180 litres (give or take) of premium northern Victorian Tawny port, most likely coming off the vine somewhere in the early 70s. Ernie’s Rotary Port Barrel had been laid down for perpetuity!

Little is known next about the journey of Ernie’s “lost barrel”. Bacchus Marsh Rotarians came and went, a handful passed, some were even around back in ’85, but they scratch their heads about Ernie’s barrel. Unfortunate for them or more likely fortunate for us, the barrel had been lost to time and completely forgotten about by the generations of Rotarians that followed, only to be discovered recently by a chance meeting and chat with our much older “young vintner”!

“Oh yeah, I remember Ernie and the Rotary boys”, he said. “Did you know Bacchus Marsh Rotary had a barrel?” Not being impolite to refuse an invitation, two PPs thought it would only be a club duty to sneak a cheeky sip..........”Please Sir, can I have some more?  Maybe to it up, again?

So, with our club’s 65th Anniversary in 2020, and Rotary Australia turning 100 in 2021, would you like to sneak a cheeky sip of Ernie’s “silky-smooth” drop from his barrel?

The Rotary Club of Bacchus Marsh would like to offer this once in a lifetime opportunity to celebrate Rotary Australia’s 100th Birthday with “Ernie’s” smooth Liqueur Tawny, beautifully presented (and boxed) in our crafted  “Centenary” Decanter. 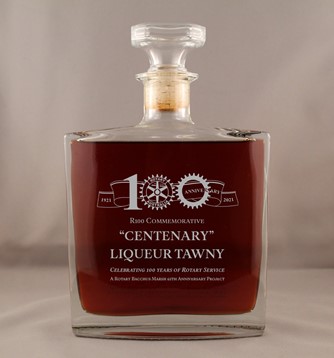 You may place your order here:  Tawny_Order_form_(1).pdf

We hope you enjoy it as much as we have…..Happy Birthday Rotary Australia!

We hope you enjoy it as much as we have…..Happy Birthday Rotary Australia!