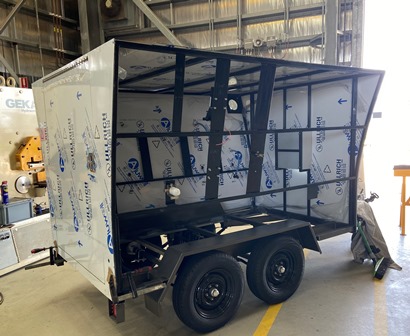 Peter said:  "With the assistance of Monash University, GHD and Telstra – together with University of Melbourne this trailer was created to encourage indigenous children in remote communities to wash their faces.  The children are being educated and aware that a dirty unwashed face may increase the likelihood of trachoma.

The Mk2 improved version of the water trailer is stronger, lower and has better dust sealing for our outback.  It is due to be completed by March 2020.  It is being built in Darwin by our partner Inpex – using indigenous tradesmen and will serve communities supported by Katherine West Health Board.

The region is the size of Victoria, with 3,000 population – 85% indigenous, 15 % professionals.  It has eight indigenous communities, 30 cattle stations including Victoria River Downs. KWHB has developed a “Health Promotion Action Plan” and Mk2 Interactive Facewashing Trailer will be showcased in community days as part of a focus on ending trachoma during 2020.

The basis of trachoma health promotion is to convey the key message of “wash your face whenever it is dirty!”  However, it is quite a challenge to promote this message as there is often no access to running water at the football oval or outside community recreation areas where trachoma and hygiene education takes place and many communities don’t have public amenities such as toilets, shower blocks, laundries or wash troughs.  There appears to be much work to be done to at least provide water to these communities.

The water trailer has a sound system, tap and water bubbler to provide hand washing and drinking water. Professor Hugh Taylor, University of Melbourne has supervised the project.

He has summarised progress as follows:

Hugh said: 'Australia is on track to close the gap for vision for Indigenous Australians by the end of 2020, but this won’t be achieved without ongoing support for long term solutions.”  Hugh hopes that Rotary will be part of the long term solution.'