There is much activity and success for our newly created Seventh area of Focus for Rotary International:  Environment Sustainability.  A very efficient and focused team of Melbourne Rotarians (Rotary Action Group) are working hard to get our attention to supporting our environment. 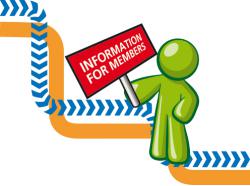 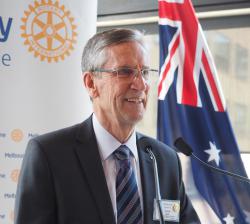 Trevor Nink wrote: "We have now drawn the line on our activities on Around the Bay for 2020. Due to the overwhelming participation and generosity of Melbourne Rotarians, we have been able to collect a princely sum of $20,451 to support scholarships for disadvantaged children in the Learning for Life program of The Smith Family. The presentation to The Smith Family will take place at our club meeting on Wednesday 2 December. All this without the riders taking to the road!" (Bravo ATB Team!) 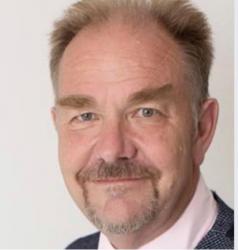 Members enjoy Reflection at our meetings, and very much the offerings of Philip Cornish. 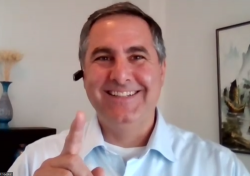 Salvatore provided a spirited presentation around Victoria's "Belt and Road" Agreement with China and was fascinating in his wealth of knowledge.  You may watch Professor Babone's address:   https://www.youtube.com/watch?v=1pwjCX4wT7M 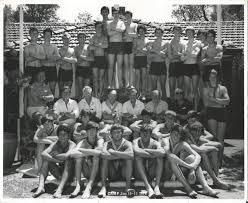 In 1928, Lord Somers attended a luncheon meeting of the club to gather support of Members for a camp to bring together youths from all walks of life to develop greater tolerance and understanding. The Club supported and pledged funds to allow the project to proceed. First two camps were held at Anglesea in 1929 and 1930, and 1931, the camp moved to its own camp site on the coast between Balnarring and the Flinders Naval Base and was named Somers. 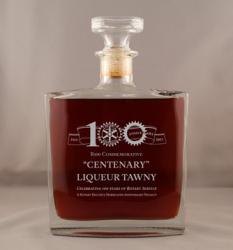 Hon Sec. Russell Board needs to be thanked for generously sharing this email with Members.  Check out the fascinating offer and saga of Ernie's Lost Barrell and its connection to Rotary Bacchus Marsh. 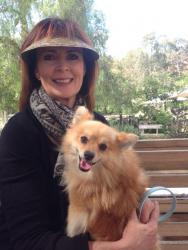 "Well we’re out of lockdown and the masks are gone!  Time for our 100th year to blossom.  There is a bit on for the last few weeks to Christmas. All the usual events and fundraising, including the wine sales are there for members to choose from. 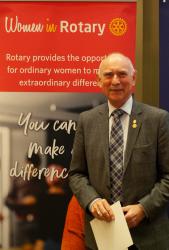 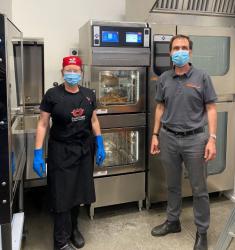 Jacques Morin (Phoeniks) is pictured here after donating 100 plus cooked chickens to FareShare. Another example of our members always looking for opportunities to give back. Jacques is a specialized Hospitality Equipment supplier.

Here is the link for the Environmental & Sustainability District November 2020 Newsletter for your downloading:   FINAL_D9800_November_2020.pdf 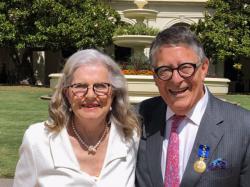 Our Hon Member, Her Excellency the Governor invested PE Reg Smith with his Order of Australia in a fine ceremony at Government House last week. The opportunity to converse directly with the Governor was a highlight as she talked of Reg’s long-standing service with the AFS and enquired how we were managing our Rotary projects during these challenging times.

What topics would our Members like to be covered from our Evening Meetings?  Simply send your suggestions to:  Renata Bernarde (Chair of Evening Meetings) renata@pantala.com.au or Kerry Kornhauser: kerry.kornhauser@gmail.com 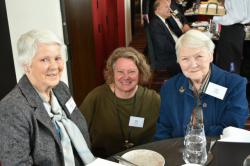 Delightful to receive the following note of appreciation of being a Sir John Reid Awardee 2019-20 from Libby Clarke (VSK).  Libby (centre) is seen here with Margaret Ross and Jean Hadges, daughters of Sir John Reid. 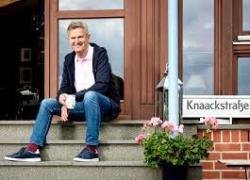 R I FOUNDATION MONTH THANK YOU 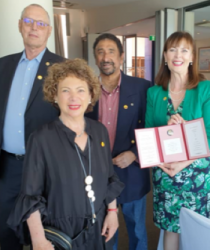 HAPPY as LARRY LUNCH was TERRIFIC

From hygiene to humour, the Happy as Larry lunch event was terrific.  Mark Balla was a passionate adviser of healthy hygienic routines who took us where 'angels fear to tread!'  Shane Jacobsen described how much impact his father has had on who he is and what he respects in life.  There was much humour and sincerity from Shane.  Pic shows: David Carruther, Kerry kornhauser, Suresh Marcandan and President Marion - actually meeting face to face again! 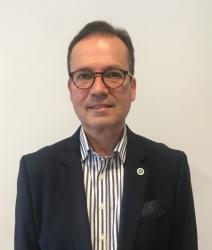 Congratulations to our President Nominee for 2022-23 Chris Sotiropoulos.  This announcement was made at our 99th Annual General Meeting last week. 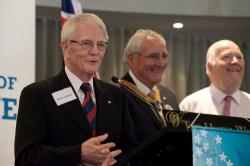 Sadly, we were advised by Ann Campbell of the passing of PP Murray Campbell in the early hours of Tuesday morning.  Murray is seen here with PP Clive Weeks and Hon Members Peter McCall enjoying the moment. Members please note funeral arrangements over page.

Held as Obit will be much the same

Murray Campbell has been a member of the Rotary Club of Melbourne for 25 years and during that time he has served in almost every office and every capacity the Club offers. He is extremely well-known around the Club; he might even be described as notorious. Rarely does a meeting conclude without some evidence of his cheeky sense of humour enlivening our day.

All members excepting our very newest know Murray well and are proud to call him a friend. Time does not permit an appropriate review of his extensive history and great achievements with the Club so this is just the tip the iceberg so to speak.

Murray was inducted into the Club in 1987 with the Classification Medical and Hospital Funds. He was then Executive Director of Manchester Unity Group. He was a member of the Host Club Executive Committee for the 1993 International Convention held in Melbourne and served as Chairman of its Finances Committee. Murray was President of the Club in 1996-97.

He was recognised by the Club as a Paul Harris Fellow in 1999 and to quote from the citation: “Murray was a natural to be a great Rotarian and he was quickly a participant across the Club’s activities”. Words as true today as when they were written last century! Murray was the Secretary 2003-05, a most unlikely role for a Past President and this is just more evidence that Murray will serve wherever he is needed.

The Club Annual Report attests to the success of his Presidential Year however there is more. It was during this year that Murray christened the Luncheon Organising Committee ‘Dad’s Army’. Murray has since taken over as Chair of the committee and still calls it Dad’s Army although Grandad’s Army might be more appropriate now. More significantly it was on his watch that alcohol was introduced to Club meetings after 75 years as a 'dry' club. It occurred following the move from the ANZ Pavilion to the Naval and Military Club where Members had to pass the bar to get to the meeting. While Murray did nothing to encourage Members to pick up a drink, he certainly did nothing to discourage it!

Murray has been the consummate Secretary. Besides being Club Secretary, he was Secretary of the Rotary Club of Melbourne Community Foundation, the International Committee and the East Timor Committee. He took on the responsibility of Company Secretary of the newly established East Timor Roofing Holding Co Ltd until all necessary formalities were finalised and the Company became a legal entity. He served for three years as Secretary of the District 9800 RAWCS Committee.

He was involved in establishing SecondBite at the Queen Victoria Market and compiled the roster for three years. He is a regular worker at the DIK Store. Finally it is important to recognise Murray’s unwavering support of the Rotary Office. Murray is always there to provide support, give insightful and helpful advice and even get his hands dirty
when reorganisation or packing is needed.

Murray Campbell is one of those very special members who give the Club a heart and a soul. You may only see Murray once a week but he makes you feel like you are part of a family. He is the glue that makes this club special. Murray, you truly are a natural to be a great Rotarian, we commend your commitment to the Club and the achievements you have
contributed to over the last 25 years and it gives us great pleasure to recognise you as a Paul Harris Fellow with Double Sapphire. 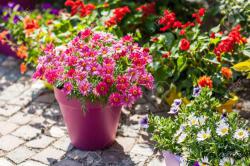 Over the past few weeks we have been encouraging members with families and friends to join in an environmental project this spring and summer by growing flowering plants whether it be in front and back gardens, patios, balconies or pots in the Colour your World project. Now check out this terrific upcoming event information featuring Lord Mayor Sally Capp. 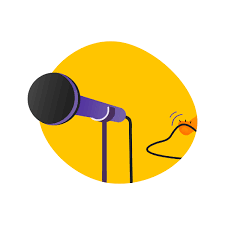 LOOK AT WHAT'S AHEAD!

LOOK AT WHAT'S AHEAD! 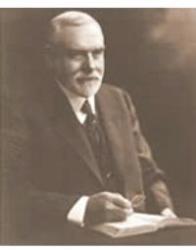 Sir Aaron Danks, (Pic.) in the 1920's, son of the founder of John Danks & Co., represented the hardware industry in Rotary Melbourne. The bathrooms of almost every home in Melbourne had fittings manufactured by Danks.

Thomas Luxton, later to be Lord Mayor of Melbourne, represented retail hardware through his family’s firm of McEwans. 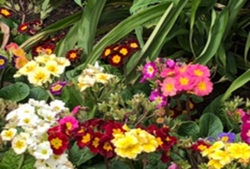 Peter Berg showcased our delightful newly created project:  Colour your World which sits in the Environmental Sustainability Fifth Focus of Rotary International.  Incidentally, we need to thank Peter Washusen and Nina Hunter for their great work in showcasing our projects. 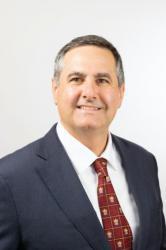