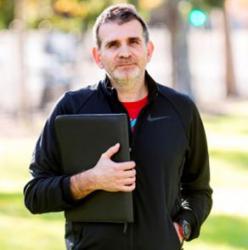 With post graduate qualifications in psychology, his experience includes managing a state-wide support service for victims of violent crime and training police graduates in the area of victim rights and support. George is though best known for co-founding and developing of the Big Issue Community Street Soccer Program which uses soccer to engage and develop homeless and marginalized people across Australia.  In this role he has coached and coordinated Australian teams at 8 Homeless World Cup events: Edinburgh 2005, Cape Town 2006, Copenhagen 2007, Melbourne 2008, Milan 2009, Paris 2011, Poznan 2013 and Glasgow 2016.

He was also instrumental in successfully bidding for and staging the 2008 Melbourne Homeless World Cup and his role included sourcing corporate sponsorship and acting as the public face of the event.

George’s experience with his team in Cape Town in 2006 was profiled on the ABC’s Australian Story while he was recently acknowledged by the Victorian Government for his contribution to community sport.

George still is still involved as National Coach of the program and is involved in many other exciting community and sport for development initiatives.