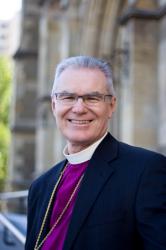 His ministry has involved ministering to people in a wide variety of contexts, both formal and informal, including cross cultural. He chaired of the Board of Delegates of the Australian College of Theology from 2002 to 2007 and is currently Chair of the Doctrine Commission of the General Synod. In 2000 he completed a PhD at James Cook University for a thesis entitled ‘Living with the Munpitch: The History of Mitchell River Mission, 1905-1967’. He maintains a keen interest in Australian Anglican history. From 2000 to 2003 he was an Honorary Fellow of the Faculty of Law, Business and Arts at the Northern Territory University.

He is married to Joy and has two adult children and three grandchildren. He includes bush-walking, reading and the visual arts among his list of recreational pursuits.