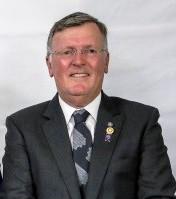 Peter was born in Melbourne and completed Bachelor of Electrical Engineering, Master of Engineering Science and Master of Business Administration degrees from the University of Melbourne. He spent 30 years with Telstra in a wide range of positions, including Executive Director and Managing Director roles. He also spent three years with Hewlett Packard and has had extensive industry involvement, dealing with media, government and community groups.

After retiring from full time employment in 2006, Peter joined the Balwyn Rotary Club, where he was President in 2011-12. He has been involved with DIK and many project areas. He was Rotary Counselor for Japanese Ambassadorial Scholar Mei Maryama. District roles include as a Club Vision facilitator, Assistant Governor for Beachside Cluster in 2013-15, Community Service Chair, DGN for 2015-16 and DGE for 2016-2017. Peter led the Group Study Exchange team to D6840 in USA Louisiana/Mississippi in 2015.

Peter is a PHF and Paul Harris Society member.

Anne is a retired secondary school science teacher, having taught Y11 and Y12 Chemistry and Biology as well as junior science at several Secondary Colleges. They have three adult children (Emma, Mark and Kate) and one grandson Lachlan. In 2015 Anne joined the Balwyn Rotary Club and Mark joined the Melbourne Park Rotary Club. Anne and Peter have travelled extensively and enjoy the internationality of Rotary. In their off time they enjoy reading, swimming, kayaking and relaxing at their Rye holiday home.