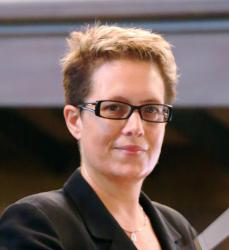 Melbourne-born Kathleen McGuire is a conductor, composer and educator who has worked in Australia, New Zealand, Ireland, Canada and England. She also spent 18 years in the United States where she earned a doctorate in conducting at the University of Colorado, Boulder. Her conducting credits include the Boulder Philharmonic, The Women’s Philharmonic, Community Women’s Orchestra, Empyrean Ensemble, University of Colorado Orchestra, Opera By the Bay (San Francisco), and a decade as Artistic Director of the San Francisco Gay Men’s Chorus. She has conducted at some of the world’s finest venues, including Carnegie Hall, the Kennedy Centre, Place des Arts (Montréal) and Sydney Opera House.

In Colorado she conducted at the Lyric Opera and the prestigious Eklund Opera Program where she studied under maestro Robert Spillman for four years, working with internationally renowned professionals from the Metropolitan Opera and Glyndebourne. While honing her craft, McGuire received mentoring from maestros Simone Young, Sian Edwards, Martin Isepp, Marin Alsop, Richard Divall, Carlo Felice Cillario and Nicholas Braithwaite. She studied formally with Robert Rosen for three years as a private student and then as a postgraduate student at the Victorian College of the Arts.

McGuire earned a Bachelor of Music degree in composition at the Melbourne Conservatorium of Music (University of Melbourne), where she studied with Peter Tahourdin and Barry Conyngham. She has been recognised multiple times in the Professional Choral Composer division of The American Prize. Her compositional interests, and recent commissions, focus upon social justice issues and affecting positive change through music, including collaborative works Street Requiem and No Excuses! which have received multiple, international performances and recognition.

Currently the music director of the Tudor Choristers and the Star Chorale, both based in Melbourne, McGuire also lectures in the Faculty of Education and Arts at Australian Catholic University and teaches music at Brunswick Secondary College. She serves on the board of the Women’s Philharmonic Advocacy, is a member of the American Society of Composer, Authors and Publishers; the Music Arrangers Guild of Australia; and Pi Kappa Lambda – the National Music Honors Society (USA).

As a recipient of a Rotary International Ambassadorial Fellowship in 1994-95 (District 9810, sponsored by the Rotary Club of Mordialloc), McGuire completed a Master of Music with Distinction in conducting at the University of Surrey, Guildford, UK. In 2017 she was selected as an inaugural recipient of the University of Surrey Vice-Chancellor’s Alumni Achievement Award. In 2018 as Cultural Ambassador of Gay Games 10, she will conduct the Festival Choir and Orchestra in Paris, France.

In 2017, Dr McGuire joined the Rotary Club of North Balwyn.