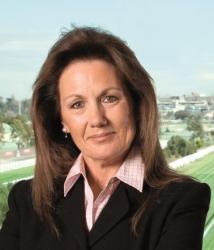 Speaking on "Amanda Elliott’s Journey and Her Love of Racing"

Mrs Amanda Elliott was elected the first female Chairman of the Victoria Racing Club in its 153 year history on 24 February 2017. Amanda was elected to the VRC Committee in 2002, making her the second female Committee Member ever appointed. She went on to become the first female Vice Chairman in 2011 and has played an integral role in pursuing the VRC’s Masterplan to enhance the race day experience at Flemington for Members and the public.

Amanda has travelled extensively as a Director and Ambassador representing the Victoria Racing Club on the Emirates Melbourne Cup Tour both nationally and internationally. During her time on the VRC Board, Amanda served on a diverse range of Committees including the Australian Stud Book and Director of Australian Genetics Testing, which was sold in 2015. She has been Chairman of the Design Group for the new Club Stand for five years, as well as a member of the Audit and Risk, Masterplan and Steering Sub-Committees.

Amanda has a B.A. from the University of Melbourne and has extensive experience at the highest levels of administration of sport, business and politics. She comes from a family with a long history of thoroughbred racing, breeding and administration. Her father was Vice Chairman of the VRC, and a longstanding Committeeman of the Club. Her respect for the heritage, history and traditions of the VRC is extremely important to her as she looks to the future.

Amanda is committed to ensuring the VRC continues to be the world’s largest membership-based racing club and Flemington remains the best by keeping the strategic focus on membership experience, a strong racing program and world-class facilities.

Amanda is a passionate racehorse owner and breeder, actively involved in the sport of racing both in Australia and overseas. In her spare time, Amanda enjoys spending time with her two daughters, Edwina and Alexandra, plays tennis and enjoys most sports along with an avid interest in interior design and fashion. Amanda lived in the United Kingdom from 1976 to 1985 and during this period, became involved in the restoration and conversion of historic buildings in Scotland as part of her interior design business. One of her projects was Cromlix House located in Perthshire in Scotland and this Hotel was awarded the Country House Hotel of the Year. With a business partner, Amanda set-up a Scottish woollens business (Amaryllis) which introduced an initiative allowing women to work from their homes. The women were producing woollen garments for both the domestic and international markets.

Amanda returned to Australia in 1985 and became involved in sports, business and politics at the highest level through marriage to Mr John Elliott, who at the time was President of the Australian Federal Liberal Party, Chairman and Chief Executive of Elders and Chairman of the Carlton Football Club. Amanda travelled extensively nationally and internationally for business, politics and sport.

Through this involvement, Amanda realised the importance of the role that women played in football, and the fact that it had not been widely recognised or acknowledged.  She then developed initiatives to address that situation which were replicated by other clubs.

Amanda served on the Melbourne City Advisory Board for Fashion Week for a period of four years.

Her full-time commitment is now to ensure that Flemington has a strategic vision for the future and a Masterplan that reflects the way forward.