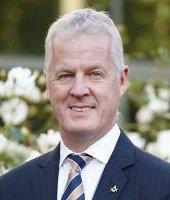 When Keith Murray moved from Scotland to Australia he had few acquaintances, but as a member of Freemasonry he knew he had little to worry about. Being a member of the organisation gave him the ability to understand all sorts of different aspects of Australian life and it also gave him Brethren he could trust, and provided him with a great deal of confidence and support to build a new career here.”

A chartered surveyor and licensed estate agent since 1986, specialising in commercial property, Keith worked in Glasgow and Edinburgh before moving to Melbourne around twenty-three years ago primarily dealing with shopping centres and retail development. He insists that he gained many valuable skills from his association with the craft: “certainly dispute resolution and public speaking but also understanding the different backgrounds of people, their culture, pressure points and positives to use in negotiations. Essentially Keith’s work is about building relationships with clients and people, and Freemasonry allowed me to relate to people better, and thus gain their trust.”

Formerly of the Lodge of Paisley  St James in Scotland, Keith is currently the Grand Master of the United Grand Lodge of Victoria and is a member of both Seavic , Earl of Dunmore and Amalthea Lodges. Keith appreciates the ability to extend the benefits of Freemasonry to his wife of 27 years. They have travelled across Victoria but also internationally and have formed many friendships which they both would call life-time friendships through freemasonry.

At his installation as Grand Master, over 1200 people attended with many Jurisdictions represented including Scotland, China, India, Canada, The Bahamas, France, to name but a few.