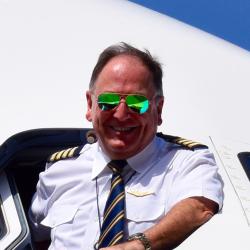 James was an Airbus A380 Captain when he retired. His career spanned thirty-one years.

he was ﬂying Airbuses with the same carrier for over ten years. Previously, he was ﬂying

a VIP Airbus A320 for a Saudi Sheikh based in Bahrain, and before that ﬂew in Vietnam,

Boeing 727, Saab340 and Metroliner; as well as the usual squadron of general

aviation aircraft. Prior to becoming a pilot he was a freelance writer and photographer

and spent eight years running his own marketing and promotions business.

He now is the principle of www.CrammondMEDIA.com

He is an Advisor to www.theaftershock.org  and an author, including Kindle bestsellers.

One of his interests is car rallying, he is Media Director of Australia's largest, and long-

for the ﬁrst round of the Australian Rally Championship, The Eureka Rally 2018.