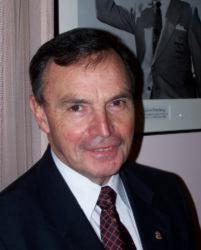 On the 5th anniversary the Battle of Amiens – 8 Aug 1923 – he was asked to say a few words at our Club meeting.  The minutes record his brief commentary on the extraordinary outcome of his planning and execution leading to the end of the war in less than 100 days from 0808.

His contribution to Victoria, Australia and the world community is legion.

His counsel to all, especially to students, was –

He is our greatest Australian by any measure.

The Rotary Club of Melbourne agreed in 2010 to award the Monash Medal each year to an outstanding Australian for her/his contribution to the Australian Community and beyond.

The criteria are Leadership, Integrity and Service – key Monash values and core values of Rotary.

This Medal is named in honour of General Sir John Monash, one of the founding members of The Rotary Club of Melbourne and its second President.

General Sir John Monash was the first Australian Commander of Australian Forces in World War 1 and the innovative planner for Allied Forces at The Battle of Amiens (0808). He is considered a “Significant Australian” for his contribution to the community before, during and after WW1.

The Monash Medal is awarded by Rotary Club of Melbourne to an outstanding Australian who has made a significant contribution to the Australian community.

The criteria are Leadership, Integrity and Service – which are three of the five core values of Rotary.