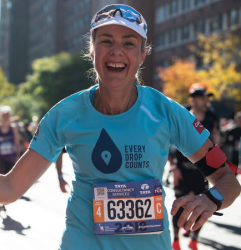 The founder and CEO of Thirst, Mina Guli is a global leader, entrepreneur and adventurer committed to making a difference in the world. Following a 15-year career in climate change, Mina established Thirst – a non-profit changing the way we think about water.

Since its launch in 2012, Thirst has educated more than 2 million students in China, has had more than 600,000 participants in its water innovation competitions and now works with more than 1000 qualified volunteers and the support of the Chinese Government.

To bring attention to the global water crisis, in 2016 Mina ran across 7 deserts on 7 continents in just 7 weeks. A self-confessed "non-runner", en route Mina interviewed water experts, telling the stories of people affected by the crisis and those working to solve it. In 2017 Mina ran in support of the UN’s SDG 6, completing 40 marathons in 40 days down 6 of the world’s great rivers on 6 continents. With media coverage around the world, including CNN, BBC, ITV, ABC and CCTV, Mina’s messages about water reached more than 4 billion people, inspiring a generation of water heroes.

Concerned about the pace of change, in 2018, Mina started #RunningDry – a campaign involving her running 100 marathons in 100 days for 1 reason – to make saving water so famous it’s not just the right thing to do, but the only thing to do. After breaking her leg at marathon 62, thousands of people in over 50 countries and territories rallied in support, together running farther than from the north to the south poles, and building #RunningDry into a movement for change.

Mina has been widely recognised for her leadership: named a Young Global Leader by the World Economic Forum, one of Australia’s most influential women, and by Fortune Magazine as one of the 50 greatest leaders in the world.

Mina sits on the board of the Antarctic Science Foundation, the Global Water Partnership and the Academy of the $1million Global Teachers Prize. She is a frequent media commentator.

Don't miss the chance to hear Mina Guli speak, you will be inspired.