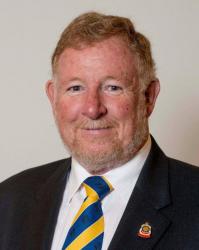 Robert Stanley Webster was born in Melbourne in 1948. He is the eldest of five children, Rob’s parents both served overseas during World War II. A student at Deepdene State School and then Swinburne Technical College, the family shifted to South Australia in 1968.

Rob was called up for National Service from Adelaide in 1969. He served in Vietnam with 26 Transport Company, Royal Australian Army Service Corps from Feb 1970 until Feb 1971. His younger brother, Ian, is also a Vietnam veteran having served in Vietnam from Sept 1970 to Sept 1971 with 110 Signals Squadron, RAA Sigs.

Rob has been a member of the RSL for over 40 years, with his original Sub-Branch being Henley & Grange (South Australia), now with Kew. Rob was President of the Kew Sub-branch from 1988 – 1994 and was co-opted to the RSL State Executive during 1989. He was a member of the State Executive for three years before being appointed Deputy State Treasurer in 1992 and then State Honorary Treasurer in 1994. After 8 years as Honorary State Treasurer he was elected Vice President in 2003 and then Senior Vice President in 2006. Rob became State President on the 1st February 2017.

Rob was a Board member of Austin Health for 15 years and currently is the Chairman of the Victorian Veterans' Children's Education Board (DVA), having been on the board for 20 years and its chair for the last nine years. He is also the RSL representative on the Defence Reserves Support Council, in which capacity he was invited to visit the Australian troops in the Solomon Islands in November 2010.

He has been involved in veteran related aged care since 1995 and has been a Director of Vasey RSL Care since 2004. With his interest in education Rob was the Victorian Corresponding Member for the Australian Veterans Childrens’ Assistance Trust. Rob was appointed to the AVCAT Board in 2017. AVCAT administers various scholarship schemes, predominantly the DVA Long Tan bursary, for children of eligible Veterans. Rob was appointed a Board Member of the Royal Humane Society of Australasia in 2018.

Rob retired from RMIT in 2009 after 31 years and has since taught part time at both Deakin University and for RMIT in both Melbourne and Singapore. Rob’s academic interests are in property investment, property finance, valuation of real estate and location decision-making behaviour in the transport and logistics industry. Prior to his RMIT career Rob worked as both an accountant and property valuer. Rob a Fellow of both CPA Australia and the Australian Property Institute. He is a member of the Australian Institute of Company Directors and holds a Doctor of Business Administration degree.

In his spare time Rob is his family's historian, enjoys reading and volunteers with CPA Australia. Rob has five children and five grandchildren and is married to Jenni.