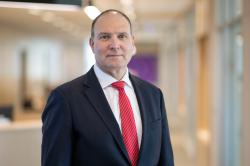 Nev is the Chairman of Perth Airport, the Foundation for the WA Museum and the Royal Flying Doctors Federation Board and is the Deputy Chairman of Strike Energy Ltd.

Nev held the position of Managing Director and CEO of Fortescue Metals Group Ltd for seven years, having joined the group in 2011.  During his tenure Fortescue more than quadrupled production and achieved engagement with Aboriginal communities. He was previously Chief Executive of the Australian operations at Theiss and prior to that spent more than ten years in senior executive positions at Smorgon Steel Group.

In 2016 Nev was named WA Business Leader of the Year.  He also has a long history in agribusiness and aviation holding both fixed wing and rotary pilot licenses. Nev is a passionate advocate for health and development of regional and aboriginal communities.  He owns and operates a cattle station in Queensland where he was born and raised.

Nev will provide an overview on the role and work so far of the National COVID-19 Coordination Commission, its focus on rebuilding the economy and people’s livelihoods as quickly and safely as possible and the Commission’s work in the not-for-profit sector in that context.

Dial in by phone from your location: