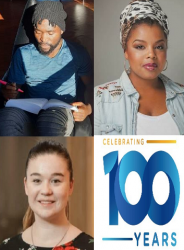 Again, this year we had to select 3 awardees from 10 outstanding candidates.  It is inspirational to read their resumes and identify their integrity and personal goals, hopes and dreams for a safe and peaceful world.

Olivia Beasley – Advocate and role model for the Deaf

Olivia is currently studying Bachelor of Communications at Deakin University as a part timer. She has 3 more years to complete her degree. Currently she is employed as Projects and Engagement Officer at Expression Australia, designing, implementing and delivering targeted engagement activities with the Deaf community.

Olivia is an emerging leader in the youth, disability and Deaf sectors, having been Youth Governor of Victoria in 2019 and leading the YMCA-led Youth Parliament. Growing up in a Deaf family has given Olivia a unique perspective. She communicates via Auslan (Australian Sign Language) at home with her siblings and parents (who are also Deaf).

In 2019, she was awarded the Deaf Youth Australian of the Year award by Deaf Australia and the Emerging Leader Award in the Victorian State Disability Awards.

Olivia has also contributed to the community through the following roles: Youth Governor of Victoria, Leading the YMCA-led Youth Parliament, serving as a Board Director of Deaf Victoria, the peak advocacy body for Deaf and hard of hearing Victorians, representing Australia at the World Federation of the Deaf Youth Section Camp in 2019, held in Paris, France.

Eangano is currently completing his Bachelor of Biomedical and Exercise Science at Victoria University, where he received the Victoria University Education High Achiever Award. In 2015 he also received a scholarship from The Smith Family and later Achievement Awards from Western Chances.

He and his seven siblings moved to Australia in 2005 as refugees from Tanzania, but his family was originally from Burundi. Poverty drove his father to try his luck and apply for the UNCHR refugee resettlement program. A year later, they were finally given the all clear to come to Melbourne. Eangano was seven.

Eangano’s abiding motivation is to help others, which he does for 15-20 hours per week. Aged only fifteen he started an organisation Acts of Random Kindness, to help children and others, which currently has 250 volunteers. A gifted athlete he is coach of the Brimbank Football Empowerment Program for children whose parents can’t afford sporting club fees. He believes he was saved by sport which can counter social isolation, boredom and youth crime.

In addition to his studies and part time work, he has participated in many community led projects and raised funds for the Salvation Army homelessness programme. In 2020, he received Brimbank Young Citizen of the Year award and Western Suburbs Unsung Hero award. Eangano chose Biomedical Science as a skill to take back to Africa and help people improve their lives. ‘My motivation is to see people thrive in my community.’

Hiba and her family arrived in Australia in 2003 after fleeing the civil war in Sudan. Growing up in Australia, her earliest memories were of overwhelming poverty and struggle. She worked to support her family and sibling. She was also actively involved in the African and mainstream Australian community and witnessed the effects that intergenerational poverty, poor mental health and poor educational effects on the communities.

Hiba has been extensively involved in the community development sector in Melbourne in recognition of the unique and complex issues that the African community faces. She co-founded AfroCare a youth-led, non for profit organisation that aims to address mental health issues through education and empowerment.

Working to link the community and mainstream service providers, it has been featured extensively on SBS, the ABC and international media as an Australian first. She has also been a Volunteer Coordinator for SAIL (Sudanese Australian Integrated Learning program).  In 2015 Hiba went to Sudan for six months as a Humanitarian Affairs Intern with the UN, organizing training programs on gender-based violence and humanitarian law. Her skills were reported as exceptional.

After 2 years as Cultural Consultant with the City Mission, she is currently employed as Policy Adviser in the Disabilities and Communities Branch of DHHS.

In 2017 Hiba was a nominee for Australian of the Year and also a Victorian Young Australian Achiever finalist.