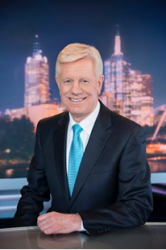 Mal Walden's career spanned six decades in broadcasting and television. On his retirement in 2013 he was reported to be the longest ‘continually’ serving face on Melbourne television.

He began his media career in 1961 at Warrnambool radio station 3YB. From Warrnambool he moved across Bass Strait to Tasmania where he joined 7EX and later TNT Channel 9, also in Launceston. Between 1966 and 1969 Mal was a general announcer and news reporter for Melbourne's 3DB.

In 1969 he based himself in the Middle East spending six months on a kibbutz in Israel from where he filed news reports to Melbourne’s radio 3DB talk back host Gerald Lions.

Mal returned to Melbourne in 1970 and joined HSV-7 where he hosted a number of shows, including the popular program Jeopardy. In 1970 he also read his first news bulletin on Melbourne television before beginning a journalism cadetship with Seven.

One of the highlights of Mal's early career was a world scoop as the first reporter to file from the scene of Cyclone Tracey in Darwin in 1974.

In 1978 Mal became the first working journalist to be appointed a senior television news presenter, a trend that has since been adopted by most other Networks.

In April 1987 Mal not only read the news, he made the news. His controversial sacking from HSV7 by the Fairfax Sydney Television Group led to public protests, staff walkouts and a plunge in news ratings to an unprecedented zero. His immediate move to the TEN Network brought a record news rating of 40% market share - the equivalent of one million viewers a night.

At Network TEN Mal presented the news bulletin with David Johnston along with a new innovative segment called "Mal's Melbourne" which covered a wide variety of human- interest stories.

This segment would become the genesis of his second successful book ‘Good News’ published 30 years later.

In December 1995 Mal was appointed senior co-presenter of Network Ten's 5pm Melbourne News a position he held until his retirement at the end of 2013.

Such was the respect in the eyes of Victorians the Premier Denis Napthine hosted a State Reception at Parliament House. Several weeks later he was awarded the Quill Life Time Achievement Award by the Victorian Press Council.

He was 17 years of age when he applied for his first job and retired at the age of 70 (on the day of his choosing) something very rare in the television industry. Over six decades there was not a news headline or major news event that Mal had not read or reported.

Since his retirement Mal has written three children’s books and published his memoir 'The Newsman’ and ‘Good News’ a selection of stories that helped shape Melbourne.

His third book published by Brolga - ‘Don’t piss in my pocket and tell me it’s raining’- a selection of unforgettable and inspirational quotes, was released in December 2018.