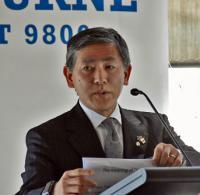 Mr Matsunaga is moving to a new assignment and by the time we meet he will be back in Japan. He will address us in a brief video message.

Mr Matsunaga will introduce Tim Stone  who will tell us the story of one of Australia's great convict escape stories of the hijack and theft of the Cyprus Brig in Van Diemen's Land in 1830, its voyage across the Pacific, and the convict crew's week-long encounter in Japan.  This story Through Samurai Eyes co-produced by Tim, was featured in ABC Radio National’s The History Listen Podcast in 2019.

Tim’s documentaries, short films and comedy series have screened at a number of prestigious film festivals around the world including Cannes Court Metrage in France, Raindance Film Festival in London, the 3rd Annual Streamy Awards in Los Angeles and St Kilda Film Festival.

Most recently Tim’s company Gatherer Media produced Wartime Stories from the Exhibition Buildings, five short documentaries in commemoration of the 75th anniversary of WW2 for Melbourne Museum and Department of Premier and Cabinet.

As a journalist Tim has interviewed some of the world's leading art figures: Hermann Nitsch, Marina Abramovic, Joseph Kosuth, Tracey Moffatt and many more.

As a broadcast journalist he has produced television for ABC News and the weekly culture show The Mix. He has reported on everything from the demise of suburban video stores to the opening of the Venice Biennale in Italy.