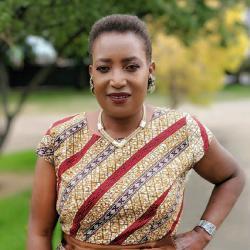 Selba-Gondoza Luka is a Mental Health Clinician, Public Speaker, Family Violence advocate and Grassroot Community Leader. She is also the Founder and CEO of Afri-Aus Care Inc, a Not-For-Profit Organisation, which provides culturally appropriate support services to African Australians and those from other CALD backgrounds.

She is also the Co-Founder of the successful Black Rhinos Basketball Club, a Crime Prevention and Intervention Program for at-risk youth, she has recently Co-Founded a Youth program called the Ubuntu Peer-Peer Restorative Family. She relates very well that there is a connection between mental illness and the connection of young people who are in the Justice System.

Based on her own lived experiences of family violence and intergenerational conflict with her daughter, Selba started working closely with African-Australian mothers with the aim of overcoming the intergeneration gaps that have been the main causes of young people ending up in the Justice System.

Recently Selba was awarded Citizen of the Year by The City of Greater Dandenong which is the most culturally diverse community in Victoria for her work during the COVID-19 pandemic. Selba has been at the forefront of major disasters in Victoria, assisting the victims of the bushfires in South Gippsland and assisting with food items distribution to African Australians in three Local Government areas: City of Greater Dandenong, City of Casey, Shire of Cardinia and Moreland City Council in response to the COVID-19 pandemic.

Selba believes in The Ubuntu Philosophy and uses the Positive Change Model when working with at-risk youth and their families. The results have been embraced very well by the Community and key Stakeholders. Based on the outcomes of the Crime Prevention programs she runs at Afri-Aus Care, the University of Melbourne has now published an article in relation to the Practice of Ubuntu in the Justice System. Please click on the link for the full article:  http://go.unimelb.edu.au/u99r

Kwacha Luka, Selba’s only daughter is also a Charter Member of the Rotary Passport Club of Melbourne and works alongside her mother at Afri-Aus Care as a Centre Manager and Court Liaison Officer assisting youth-at-risk and their families in Magistrate Courts in Metropolitan Melbourne. Kwacha is also a qualified fashion designer and her label is called “Kwacha”. Kwacha is a mentor to many young African Australians