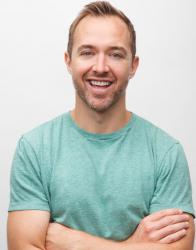 Spread the word to your family and friends!!

JOE MURPHY is a writer/producer from Melbourne. Actually, he’s from Tangambalanga, but no one knows where that is, or how to pronounce it. After graduating from Monash University, Joe wrote and directed theatre and short films for the Melbourne Comedy Festival and Melbourne Fringe Festival.

In 2012, Joe moved to the US to chase his version of the American dream: scripted television. He is currently writing and producing two Darren Star series, YOUNGER (Paramount+ / Stan) and EMILY IN PARIS (Netflix).

Before being staffed in a writer’s room, Joe honed his craft on NURSE JACKIE (Showtime), THE CARRIE DIARIES (CW), THE LEFTOVERS (HBO), DIFFICULT PEOPLE (Hulu), THE JIM GAFFIGAN SHOW (TV Land), and several others.

As a writer, Joe’s sweet spot is half-hour comedy where the lead is LGBTQIA+, not the sassy sidekick. Joe has lived many lives to draw story. He’s been a drama teacher, a reality TV producer, a snorkelling instructor, a trivia host, a bartender, as well as the banker and the Easter bunny on DEAL OR NO DEAL.

After 9 years in New York, he now lives in Los Angeles with his husband and their 22-month-old daughter, whom they recently taught to say “Gaga”. They couldn’t be prouder.