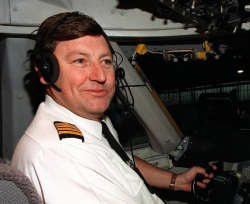 Beginning his aviation career in 1969 as graduate of No.5 Qantas Cadet Pilot Course, Trevor flew B707, B747 and B767 aircraft for the Company holding  Command and Check Pilot status on the latter two types.

He was the Technical Director of the Australian International Pilot’s Association for two years prior to being appointed to the Qantas Flight Operation’s management team in 1984.  Between 1984 and 1996, he held several senior appointments included Superintendent Flight Safety and General Manager B747 Operations.

Trevor resigned from Qantas in November 1996 to take an appointment as the Executive General Manager Operations and Inflight Services at Ansett Australia.  Since  2001, he has held “C” level appointments in large international/Domestic airlines, Low Cost airlines and freight airlines within Australasia, Asia and Europe.

He was a member of  the Flight Safety Foundation team responsible for the development and implementation of the highly successful Basic Aviation Risk Standard (BARS) program.

During his career, he has held regulatory responsibility for Air Operator Certificates (AOC) and Certificates of Approval (Maintenance) issued by the Australian Civil Aviation Safety Authority (CASA), the New Zealand CAA and the Myanmar DCA.

With strong commitment and passion for educating future aviation professionals, Trevor has held appointments in academia at several Australian Universities and has served as a member of the Aviation Study Group of Linacre College at Oxford University.

During 2015, he was the ‘start-up’ CEO of FMI Air, a domestic RPT airline operating in Myanmar.  Most recently, he was Chairman of the Board of Nauru Airlines Corporation.

Note: Proof of Vaccination is required on entry to Sofitel function spaces