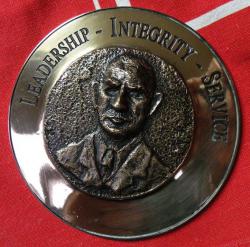 Venue: No35 Sofitel on Collins

The Monash Medal is awarded for - Leadership, Integrity and Service - Values of Sir John Monash and of Rotary - to an outstanding Australian who has made a significant contribution to the Australian community and beyond.

The Monash Medal is awarded annually to an Australian who has made an outstanding contribution to the Australian community and beyond.

The Rotary Club of Melbourne presents the Medal to remember and honour Gen. Sir John Monash, a significant Charter Member of The Rotary Club of Melbourne and so a Founder of Rotary in Australia (RCM was Australia's first RC in 1921 and Monash was its 2nd President).  Monash was outstanding in his contribution to the community before and after WW1 during which he was the first Australian Commander of all Australian Forces on the Western Front.  He planned and the Australians spearheaded the victory in The Battle of Amiens commencing 8 Aug 1918 which led to the far earlier than predicted end of WW1.

No35 Sofitel on Collins