0808 at 8am Battle of Amiens Commemoration Service 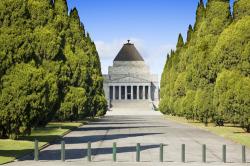 Our annual commemoration service to commemorate our club's founding member, General Sir John Monash and his leadership to victory in the Battle of Amiens. Held in partnership with the Spirit of Australia Foundation and the Shrine of Remembrance. 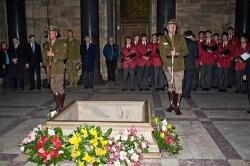 0808 Committee 104th Commemoration of the Battle of Amiens

At 0745 hrs you are invited to gather at The Shrine of Remembrance Visitors Centre to honour the detailed planning and marvellous execution of the great battle and victory in the Battle of Amiens - WWI by the Australian Forces united for the first time under Australian Command.

On the 8th of August, 1918, 104 years ago the Battle of Amiens was fought. It was the first time that all five Australian Divisions fought together under the Australian Commander General Sir John Monash GCMG, KCB, VD. It was preceded by meticulous planning and preparations to enable the co-ordinated use of all the resources available including aircraft, tanks, artillery and infantry.

After four years of war both the allies and the German’s were battle weary and depleted. Late in July the allies set a cunning trap pretending to weaken the front line and sending out false radio communications whist sneaking troops and artillery to the front lines at night. At 4:20am on 8 August they attacked. Unlike previous offences, there was no shelling until the attack commenced. The battle ground was shrouded in mist which assisted the element of surprise. The German’s were completely unprepared, so much so, it is said that many were killed or captured while eating their breakfast.

The allies were bolstered by more than 500 hundred tanks and two thousand aircraft in the battle which saw a shift away from the traditional trench warfare to mobile above ground fighting, which the Australian’s preferred and to which they excelled. By mid-afternoon the offensive had advanced nearly 12 kilometres.

The German forces never recovered with general Erich Ludendorff describing it as “the black day of the German army in the history of the war” German commanders were quick to concede that victory on the western front was not long possible. It heralded the start of the One Hundred Days Offensive which lead to the signing of the armistice on November 11, 1918.

After the war Monash returned to civilian life and was instrumental in the establishment of the Rotary Club of Melbourne becoming its second President.