When Canadian Rotarian James Wheeler Davidson sought to expand Rotary into Australia in the early 1920s, the first people he consulted were the most influential in Melbourne - and that included Sir John Monash.

Monash had returned to Australia only fifteen months earlier with a reputation as one of the great generals of World War I. As a corps commander, he had been successful at the battle of Hamel on 7 July 1918 with a combined offensive of infantry, artillery, tank corps and airforce which broke the deadlck of trench war, and was described by military historians as the first modern battle. A month later, with the Canadians, he made the break-through that led to the Armistice in November. To secure him a charter member of the first Rotary Club in Australia was a master stroke.

There was much more to Monash than the army general. He belonged to a cultured Prussian Jewish family whose home in Richmond was a gathering place for music lovers and those interested in extra-sensory perception, of whom Alfred Deakin, the future Prime Minister of Australia, was one. Monash was dux of Scotch College and graduated from Melbourne University in Engineering, Arts and law. As a student, he was co-founder of the Melbourne University Union. He had a continuous association with the University for the rest of his life. Before the war he was a part-time lecturer in engineering, the Chairman of the Graduate Association, and President of the University Club. After the war he was elected to the University Council and held the offices of Vice-Chancellor from 1923 and acting Chancellor in 1925-26.

As an engineer before the war, Monash was one of the principals of the Reinforced Concrete and Monier Pipe Construction Co. Ltd. He returned to same company after the war and, when it was taken over by the Hume Pipe co. (Aust.), he became a director of that company. In June 1920 he was appointed General Manager of the State Electricity Commission to oversee the Yallourn project.

On Thursday 21 April 1921 at the inaugural luncheon of the proposed Rotary Club of Melbourne, Monash was a charter member.

Each year we commemorate Sir John Monash in the week of 8th August, the anniversary of the Battle of Amiens. We hold a service in Melbourne's Shrine of Remembrance at 8am on the 8th. That same week, we also present our annual Monash Medal to an outstanding Australian who has made a significant contribution to the Australian community and beyond. It is awarded for Leadership, Integrity and Service - the values of Sir John Monash and of Rotary. 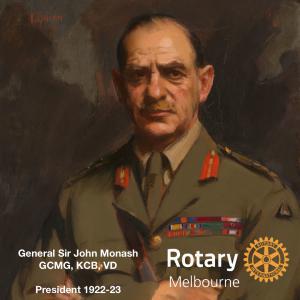