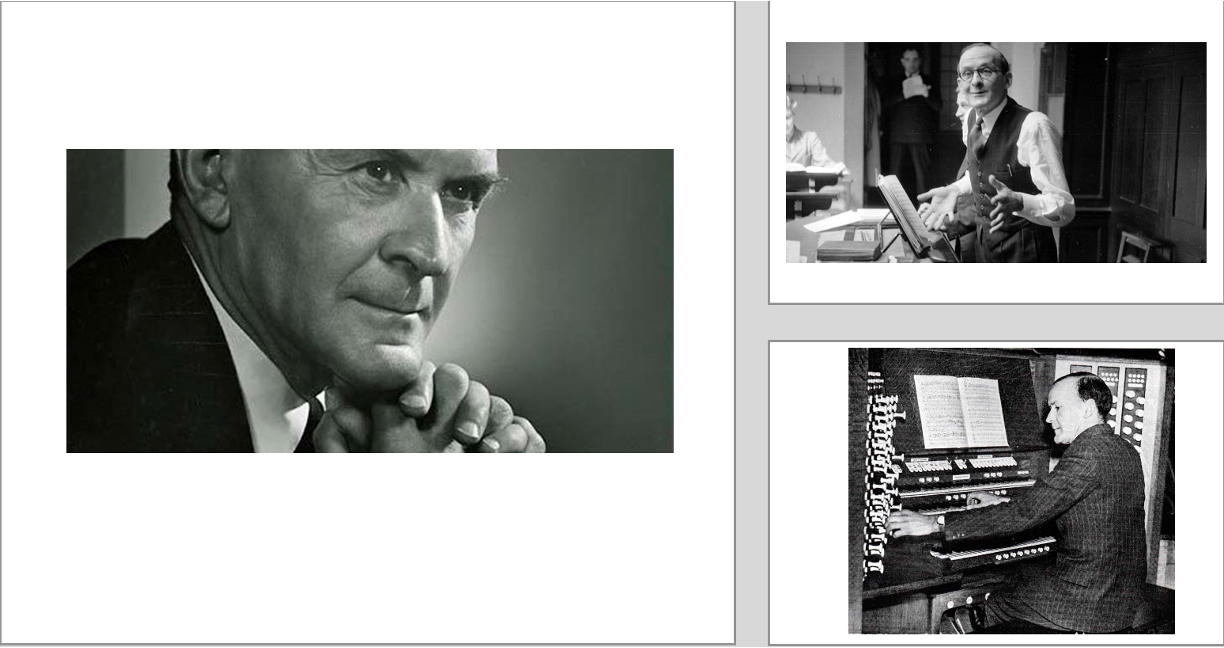 Bill was born in Collingwood on the 22nd. May 1901 the son of the local Anglican vicar. He schooled at Melbourne Grammar School where he studied music and at the age of 18 won the prestigious Clarke Scholarship from the University of Melbourne enabling him to study at the Royal College of Music in London. Following this he became Organ Scholar of Worcester College, Oxford where he gained his MA and BMus degrees.

In 1926 Bill took up his first professional appointment as Director of Music at Clifton College, Bristol, and is now perhaps the most famous of all Cliftonian organists. In 1930 at just 29 years of age the Melbourne City Council invited him home to become City of Melbourne organist and Musical Advisor to the Council. This role allowed him to play one of the world’s ten leading and grandest pipe organs situated in the Melbourne Town Hall giving regular and highly popular lunch-time recitals for the next seven years. In 1934 while continuing as the Melbourne City Organist he was appointed Director of Music at Geelong Grammar School by the then headmaster James Darling.

In conjunction with this appointment Bill accepted the most prestigious and significant role of Organist and Choir Master at St. Paul’s Cathedral.

On the 6th. August 1934 Bill signed a Membership Card applying to become a member of the Rotary Club of Melbourne. Bill was residing in Kew, his business address being Music Master at Geelong Grammar whilst another business address was the Town Hall, Melbourne.

Bill’s great love of music enabled him to encourage a small group of fellow Rotarians to open the weekly meeting with a choral number that other members and guests were encouraged to join and sing along with. His popular and enduring membership lasted until 1938 when much to our club’s loss and Bill’s gain he moved to England to take up the position of Organist of Magdalen College, Oxford thus becoming one of the most prominent church musicians of his day. In 1941 he was appointed Organist and Choir Master at Westminster Abbey; a position he held until his retirement in 1963.

Bill was responsible for reforming the Abbey Choir after the war and in 1947 directed the music for the marriage of Princess Elizabeth and the Duke of Edinburgh for which he was appointed a Member of the Royal Victorian Order.

The peak of William’s career came with the Coronation of Elizabeth II on the 2nd. June 1953. In Westminster Abbey before 8,000 guests, a choir of 400, an orchestra of 60 and military trumpeters the musical arrangements, under the ultimate direction of McKie went “without a hitch”. He chose music, which was eclectic, both old and new using compositions from previous coronations. The day before the Coronation, Bill was knighted in the Coronation Honours.

Bill directed the music for the marriage of Princess Margaret in 1960. In 1963, after 22 years at Westminster Abbey he retired to Kent before moving to Ottawa, Canada remaining there until he passed away in 1984.

Sir William McKay, born in Collingwood, popular and highly respected Rotary Club of Melbourne member, Organist and Choirmaster for Royal Weddings and a Coronation now lies safely at rest in the West Cloister of Westminster Abbey.

A little closer to home, William’s sister, Ruth Isobel was married to the Reverend Egan Eggleston, Vicar of the venerable, 1864 constructed, St. James Church of England, Dandenong. Egan Eggleston was the officiating minister to the marriage of your scribe and his wife Kaye just 60 years ago.

Another example of ‘Six Degrees of Separation’.