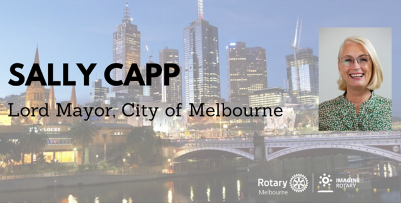 Topic ‘State of the City’

Venue No 35 Sofitel or ZOOM

No where is the challenge of recovering from COVID restrictions more evident than in the Melbourne CBD. Let's support the work of Lord Mayor Sally Capp in leading Melbourne’s recovery by attending this meeting. As President Adrian has asked if all members could make the effort to attend the meeting and invite a guest this Wednesday, where we will also be recognising the Lord Mayor with a Paul Harris Fellow, for her continued support of Rotary activities and service to the Community.  We hope to have a good number there to congratulate our newest Paul Harris Fellow.

Sally Capp was re-elected Lord Mayor of Melbourne in October 2020 after having previously been elected in May 2018 and is the first woman to be directly elected as Lord Mayor.

Sally’s top priority is bringing the buzz back to Melbourne and driving the city’s economic recovery following the devastation caused by the COVID pandemic.

Sally is committed to helping rough sleepers get more support and a pathway into secure housing, and ensuring Melbourne remains a global leader in environmental sustainability.

Sally was the first woman to hold the post of Agent-General for Victoria in the UK, Europe and Israel. She has also served as the CEO for the Committee for Melbourne and Victorian Executive Director of the Property Council of Australia. A passionate Collingwood Football Club supporter, in 2004 Sally made history as the first female board member of Collingwood Football Club.

Sally began her career as a Solicitor, after completing Law (Hons) and Commerce degrees at the University of Melbourne. She has held senior roles at both KPMG and ANZ, and co-founded a small business which she took to the ASX.
She is involved in a number of charities, currently sitting on the board of the Olivia Newton-John Cancer Research Institute, the Mary Jane Lewis Scholarship Foundation and the Melbourne University Faculty of Business and Economics.