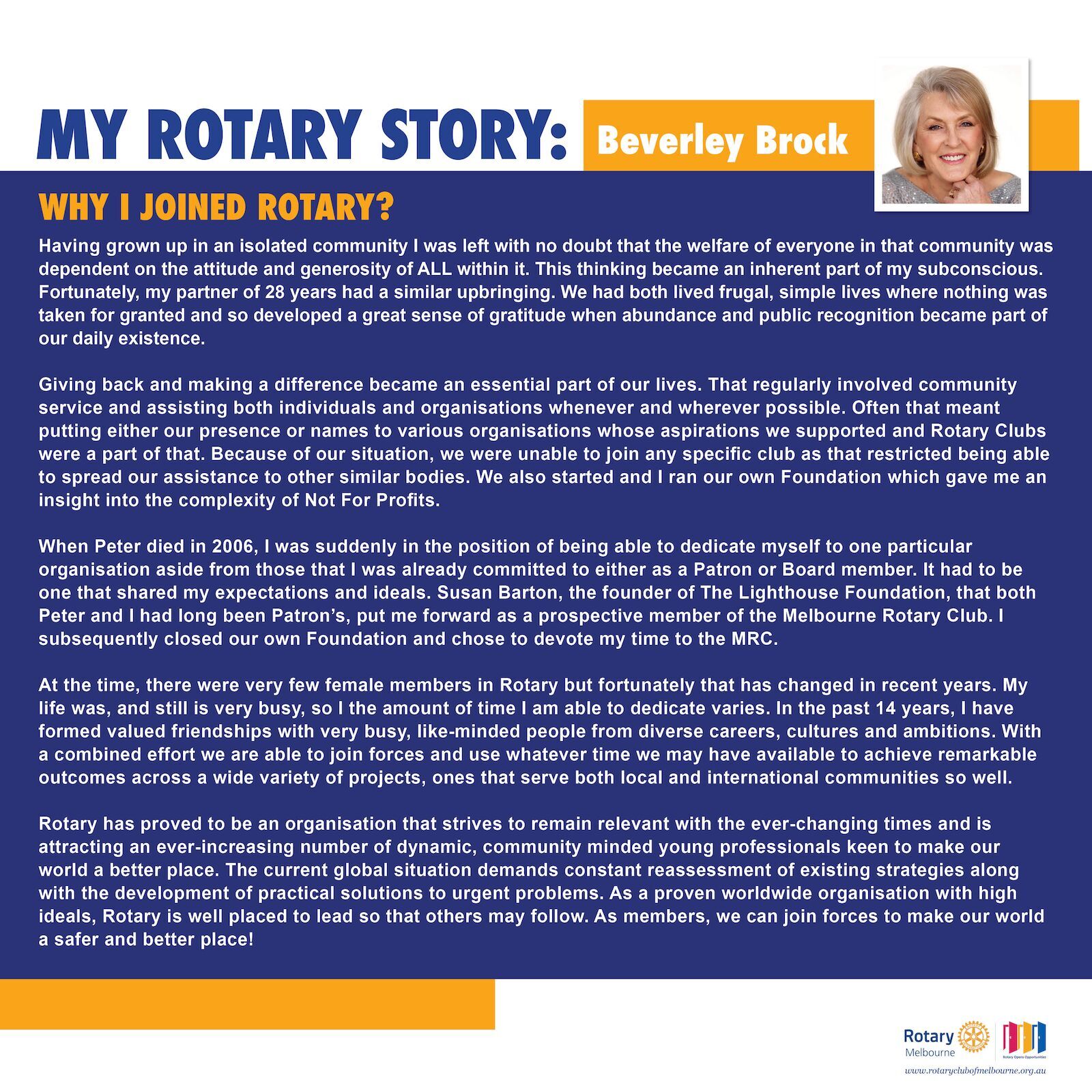 Having grown up in an isolated community I was left with no doubt that the welfare of everyone in that community was dependent on the attitude and generosity of ALL within it. This thinking became an inherent part of my subconscious. Fortunately, my partner of 28 years had a similar upbringing. We had both lived frugal, simple lives where nothing was taken for granted and so developed a great sense of gratitude when abundance and public recognition became part of our daily existence.

Giving back and making a difference became an essential part of our lives. That regularly involved community service and assisting both individuals and organisations whenever and wherever possible. Often that meant putting either our presence or names to various organisations whose aspirations we supported and Rotary Clubs were a part of that. Because of our situation, we were unable to join any specific club as that restricted being able to spread our assistance to other similar bodies. We also started and I ran our own Foundation which gave me an insight into the complexity of Not For Profits.

When Peter died in 2006, I was suddenly in the position of being able to dedicate myself to one particular organisation aside from those that I was already committed to either as a Patron or Board member. It had to be one that shared my expectations and ideals. Susan Barton, the founder of The Lighthouse Foundation, that both Peter and I had long been Patron’s, put me forward as a prospective member of the Melbourne Rotary Club. I subsequently closed our own Foundation and chose to devote my time to the MRC.

At the time, there were very few female members in Rotary but fortunately that has changed in recent years. My life was, and still is very busy, so I the amount of time I am able to dedicate varies. In the past 14 years, I have formed valued friendships with very busy, like-minded people from diverse careers, cultures and ambitions. With a combined effort we are able to join forces and use whatever time we may have available to achieve remarkable outcomes across a wide variety of projects, ones that serve both local and international communities so well.

Rotary has proved to be an organisation that strives to remain relevant with the ever-changing times and is attracting an ever-increasing number of dynamic, community minded young professionals keen to make our world a better place. The current global situation demands constant reassessment of existing strategies along with the development of practical solutions to urgent problems. As a proven worldwide organisation with high ideals, Rotary is well placed to lead so that others may follow. As members, we can join forces to make our world a safer and better place!