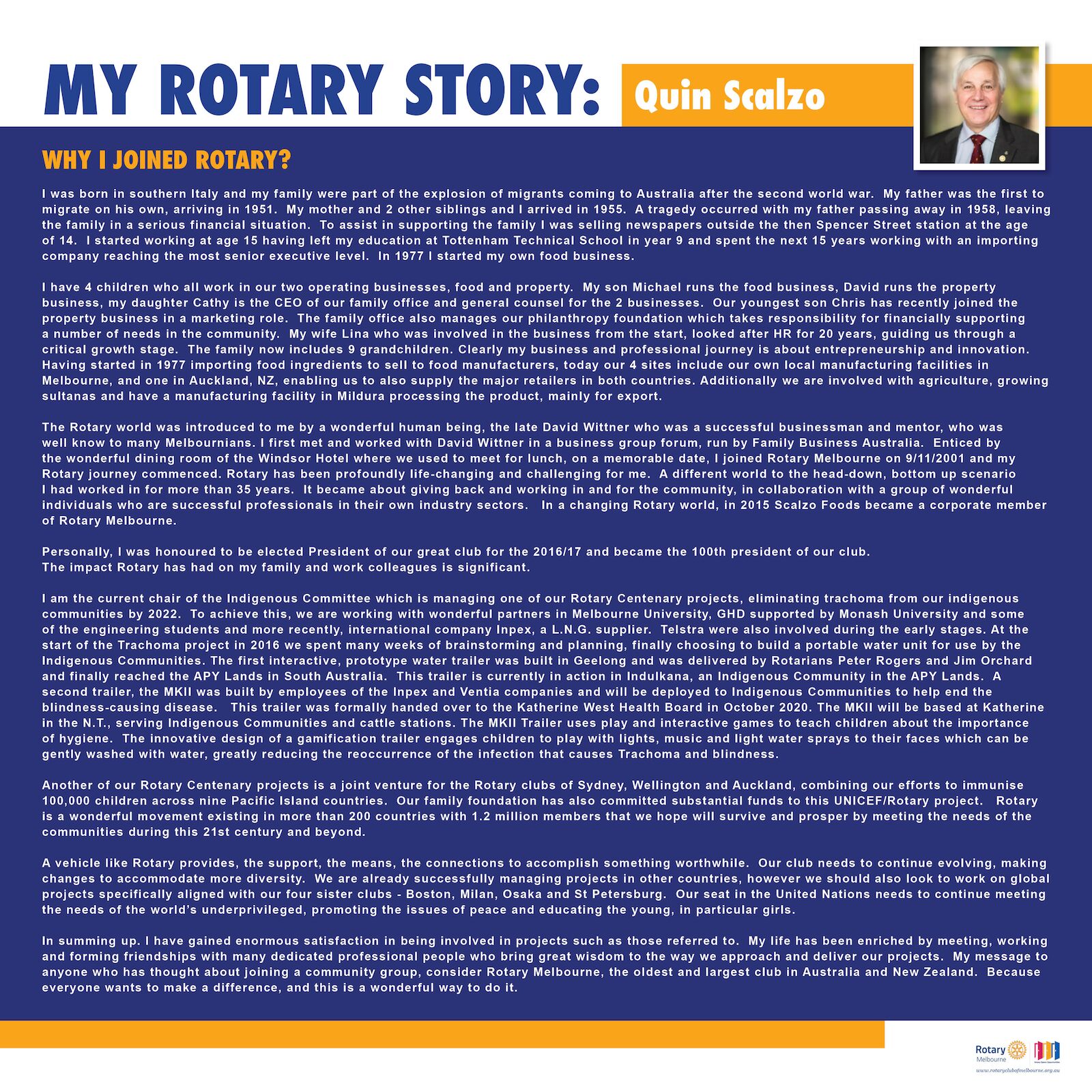 Quin migrated with his family from Italy to Australia in 1955.

Quin became the founder of Scalzo Food Industries, one of Australia and New Zealand’s Top 50, privately-owned, board run food business that began operations in 1977. Our capabilities in ingredient supply, as partners to retailers and manufacturing expertise have fuelled our development. We’re an agile, growth orientated business that focuses on innovation and adding value to drive mutually beneficial partnerships.

Scalzo Foods is located in Melbourne with a network of manufacturing capabilities, offices and warehouses across Australia and New Zealand.  We have also made a large commitment to Agricultural in Australia with investments in Farms in regional Victoria and a Plant Protein facility, which has extended our capabilities in the export market.

Quin is a dedicated Rotarian and is the past President of the Rotary Club of Melbourne.

Awarded a Member of the Order of Australia in May 2018.

The Scalzo family established the Grace and Emilio Foundation, which is committed to ensuring that children and young people at risk of not meeting their full potential are given the support they need to thrive. The Foundation funds the work of numerous charities in Australia and globally.

He is married to Lina and they have 4 children and 9 grandchildren.

I was born in southern Italy and my family were part of the explosion of migrants coming to Australia after the second-world war.  My father was the first to migrate on his own, arriving in 1951.  My mother and two other siblings and I arrived in 1955. A tragedy occurred with my father passing away in 1958, leaving the family in a serious financial situation. To assist in supporting the family I was selling newspapers outside the then Spencer Street station at the age of fourteen.  I started working at age fifteen having left my education at Tottenham Technical School in year nine,  and spent the next fifteen years working with an importing company reaching the most senior executive level.  In 1977 I started my own food business.

I have four children who all work in our two operating businesses, food, and property.  My son Michael runs the food business, David runs the property business, my daughter Cathy is the CEO of our family office and general counsel for the two businesses.

Our youngest son Chris has recently joined the property business in a marketing role.  The family office also manages our philanthropy foundation which takes responsibility for financially supporting a number of needs in the community.  My wife Lina who was involved in the business from the start, looked after HR for twenty years, guiding us through a critical growth stage.  The family now includes nine grandchildren. Clearly my business and professional journey is about entrepreneurship and innovation.

Having started in 1977 importing food ingredients to sell to food manufacturers, today our four sites include our own local manufacturing facilities in Melbourne, and one in Auckland, NZ, enabling us to also supply the major retailers in both countries. Additionally, we are involved with agriculture, growing sultanas and have a manufacturing facility in Mildura processing the product, mainly for export.

The Rotary world was introduced to me by a wonderful human being, the late David Wittner who was a successful businessman and mentor, who was well know to many Melbournians. I first met and worked with David Wittner in a business group forum  run by Family Business Australia. Enticed by the wonderful dining room of the Windsor Hotel where we used to meet for lunch on a memorable date, I joined Rotary Melbourne on 9/11/2001 and my Rotary journey commenced.

Rotary has been profoundly life-changing and challenging for me. A different world to the head-down, bottom-up scenario I had worked in for more than 35-years. It became about giving back and working in and for the community, in collaboration with a group of wonderful individuals who are successful professionals in their own industry sectors.

In a changing Rotary world, in 2015 Scalzo Foods became a corporate member of Rotary Melbourne. Personally, I was honoured to be elected President of our great club for the 2016/17 and became the 100th president of our club.

The impact Rotary has had on my family and work colleagues is significant.

I am the current chair of the Indigenous Committee, which is managing one of our Rotary Centenary projects, eliminating trachoma from our indigenous communities by 2022.  To achieve this, we are working with wonderful partners in Melbourne University, GHD supported by Monash University and some of the engineering students and more recently, international company Inpex, a L.N.G. supplier.  Telstra were also involved during the early stages.

At the start of the Trachoma project in 2016 we spent many weeks of brainstorming and planning, finally choosing to build a portable water unit for use by the Indigenous Communities. The first interactive, prototype water trailer was built in Geelong and was delivered by Rotarians Peter Rogers and Jim Orchard, and finally reached the APY Lands in South Australia.  This trailer is currently in action in Indulkana, an Indigenous Community in the APY Lands.

A second trailer, the MKII was built by employees of the Inpex, and Ventia companies and will be deployed to Indigenous Communities to help end the blindness-causing disease.   This trailer was formally handed over to the Katherine West Health Board in October 2020. The MKII will be based at Katherine in the N.T., serving Indigenous Communities and cattle stations. The MKII Trailer uses play and interactive games to teach children about the importance of hygiene.  The innovative design of a gamification trailer engages children to play with lights, music and light water sprays to their faces which can be gently washed with water, greatly reducing the reoccurrence of the infection that causes Trachoma and blindness.

Another of our Rotary Centenary projects is a joint venture for the Rotary clubs of Sydney, Wellington, and Auckland, combining our efforts to immunise 100,000 children across nine Pacific Island countries.  Our family foundation has also committed substantial funds to this UNICEF/Rotary project.

Rotary is a wonderful movement existing in more than 200 countries with 1.2 million members that we hope will survive and prosper by meeting the needs of the communities during this 21st century and beyond.

A vehicle like Rotary provides, the support, the means, the connections to accomplish something worthwhile.  Our club needs to continue evolving, making changes to accommodate more diversity.  We are already successfully managing projects in other countries; however, we should also look to work on global projects specifically aligned with our four sister clubs - Boston, Milan, Osaka, and St Petersburg.  Our seat in the United Nations needs to continue meeting the needs of the world’s underprivileged, promoting the issues of peace, and educating the young, in particular girls.

In summing up. I have gained enormous satisfaction in being involved in projects such as those referred to. My life has been enriched by meeting, working, and forming friendships with many dedicated professional people who bring great wisdom to the way we approach and deliver our projects.  My message to anyone who has thought about joining a community group, consider Rotary Melbourne, the oldest and largest club in Australia and New Zealand.  Because everyone wants to make a difference, and this is a wonderful way to do it.