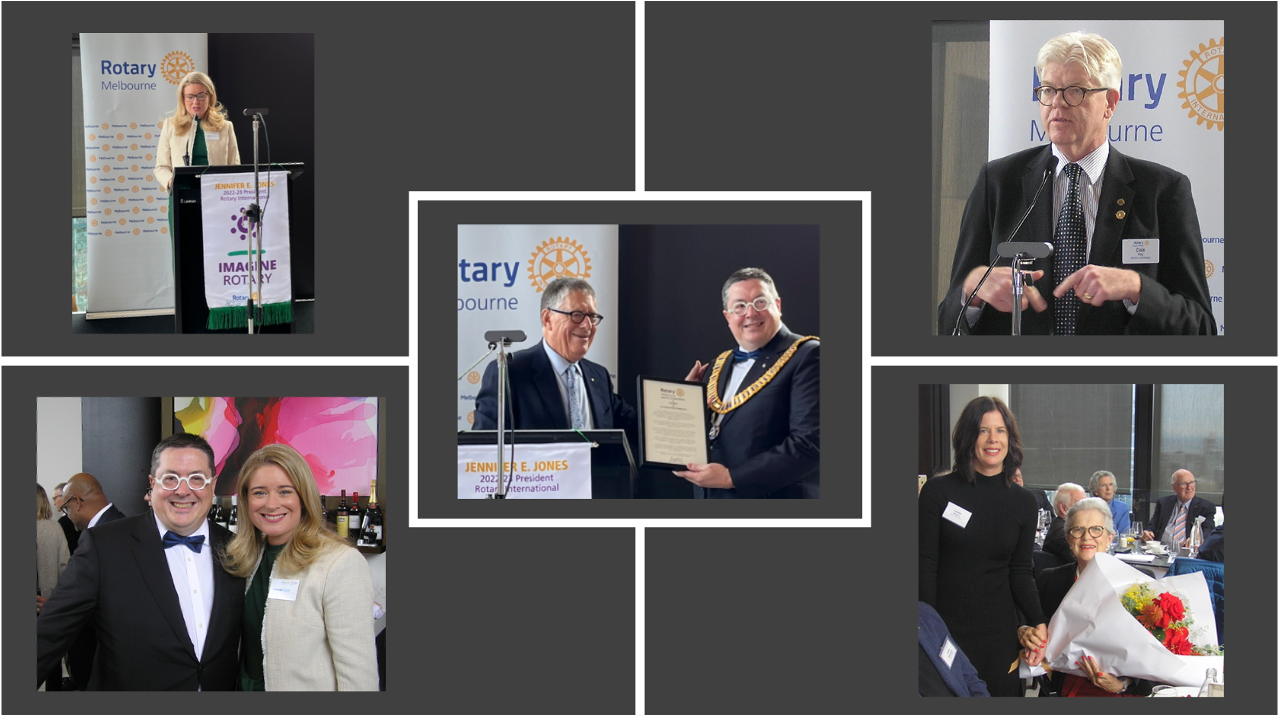 This years meeting was a little more modest than recent years due to the other load of big events in June.  It was nevertheless well attended by more than 70 members and their guests in person or on-line.  Attendees included our very own District 9800 Governor (2022-23), Amanda Wendt and her partner, Greg Harbour, and District 9800 Governor (2021-22) Dale Hoy. DG Dale proposed a generous toast to Rotary Melbourne for the internationality of the Club’s service.  Amanda delivered our Club’s statement of respect to the traditional owners of the land on which we meet.

The meeting was conducted in Rotary Melbourne's usual hybrid format and the recording is available for viewing on the Club’s You Tube Channel. Click here to watch: https://youtu.be/bGEir7-L9KI

Outgoing President Reg was delighted to induct Sap De as a member, introduced by his sponsor Dasun Premadasa.  He also presented Paul Harris Fellow Awards to Environment sustainability Committee Co-Chairs, Peter Berg.  Peter’s citation noted his exceptional work on the the Club’s first two Environment Sustainability Awards, while Garry’s recognised his application of his vocational talents in creating the Carbon Calculator, which has now been launched for use by all Rotary Clubs.

Maestro David Kram added to the light hearted atmosphere on the piano, playing popular musical riffs between meeting items as only David can.  The pictures included with this report were skilfully taken by a member of the Photography team, Bruce Davidson.

President Reg summed up his year long experience as Rotary Melbourne President as life changing.  He stressed the importance of restoring our Club’s strong fellowship and speaker experiences as the foundation of service through diverse projects with wide reach, including several celebrating the Centenary of our Club, and Rotary in Australia.

He thanked members for their trust and support for him in having the privilege of Presidency. 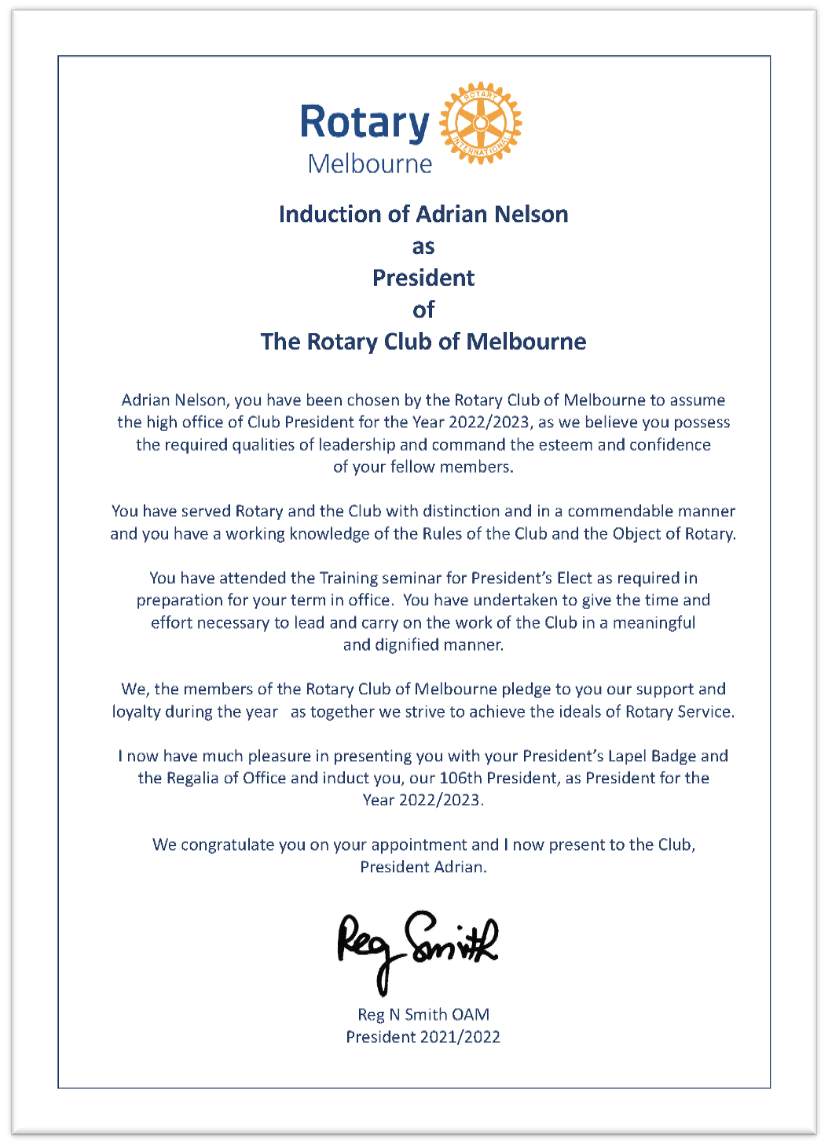 President Reg proudly introduced and inducted Adrian Nelson as the 2022-23 Rotary Melbourne President and Adrian highlighted his focus, respecting the traditions of our club, and beginning the journey into the next 100 years with gusto.

President Adrian highlighted 2022-23 as a landmark year in which the the Club will embrace opportunities around the Rotary International Convention, and in broadening membership off the Club to leaders wanting to serve.  He announced the inclusion on this year’s board of Bev Brock OAM as an observer, as an acknowledgement that Bev was originally to be the 2022-23 President, until  serious health issues intruded.  He highlighted the our Club has always been one with big ideas, celebrating this year the 100th anniversary of Sir John Monash’s presidency, and Amanda Wendt being the Club’s first female member to be made District Governor, after 47 years since our last Club member assumed this role.

President Adrian welcomed the Rotary International President Jennifers Jones’ theme of Imagine, as a clarion call for adapting to the changed environment in Melbourne, post pandemic welcoming the opportunity created by the Club’s hybrid meeting capacity to welcome international speakers, and members and guests from widely dispersed locations.  He envisioned our meetings as being dynamic, relevant, and challenging our thinking. He highlighted the Club’s work on the Social Enterprise Accelerator project in development under the leadership of President Elect 2023-24 Chris Sotiropoulos. This will help build leadership in the club, as well as attracting a new generation of leaders to our Club.

In closing Adrian called on members to celebrate the internationality of Rotary, and make our welcoming badge of friendship our smile.

Reg and Adrian’s addresses can be accessed by clicking HERE.