In 1934, at the request of the Rotary Club of Melbourne, the City of Melbourne Council made available a small area in the King’s Domain for a Rotary Park of Remembrance, where trees could be planted or ‘dedicated’ to honour distinguished Rotarians or mark significant Rotary occasions.

Where is Rotary Park?

Rotary Park is located in the south-east corner of the Domain, bounded by Birdwood Ave, Domain Rd, Anderson St and the Royal Botanic Gardens.

All of the trees that have been planted or dedicated are marked with bronze plaques.  About half of the 65 trees in the Park are native Australian species and the remainder European, reflecting the diversity of native species and the history of Melburnians’ interests in trees.

The Park was inaugurated in March 1935 when Paul Harris, founder of Rotary, planted a Brush Box (Lophostemon confertus) that is today a fine specimen of this species. His wife, Mrs Jean Harris, also planted a tree on that occasion as did Angus Mitchell, the then District Governor and later first Australian President of Rotary International, and his wife, Mrs Teena Mitchell. Professor William Osborne, the Foundation President of the Rotary Club of Melbourne, and Alfred Holtz, a past President of the Club and past District Governor were other notables who planted trees on that occasion. Not all the trees survived the ravages of time and vandals, but replacements have been made, and the Park has become a much loved and used venue for walking, jogging, reading and sylvan contemplation.

Over the 70 years since Paul Harris and other notables planted those first six trees, a red granite seat has been erected as a memorial to the work of Paul Harris and Angus Mitchell, and a further 34 trees gave been planted or dedicated by:

The City of Melbourne Council continues to manage and protect the Park, providing another example of the enduring and supportive relationship between the Rotary Club of Melbourne and the City of Melbourne. The Rotary Park Committee hopes that Melburnians will long continue to enjoy and respect this living piece of Rotary history.

2019-20 RI President Mark Maloney and his wife Gay of the Rotary Club of Decatur, Alabama, USA, unveiled a plaque at the foot of a River Red Gum Eucalyptus tree planted in his honour. 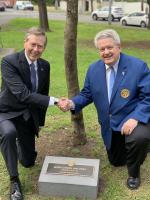 On 15th June 2005 a tree was planted by Victoria Governor, John Landy to mark the Centenary Of Rotary.