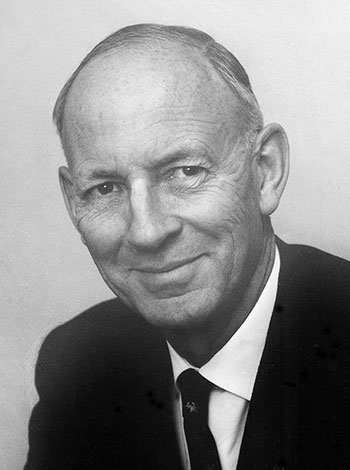 More than 1.5 million volunteers are making an important impact across Victoria in building our communities, services, and connections.


Rotary Melbourne wishes to pay tribute to those dedicated achievers, and encourage others to follow their lead through the Sir John Reid Community Service Award.


Nominations are now open and close on 13 September 2021.

Sir John Reid was inducted into Rotary Club of Melbourne in 1939 and remained a Rotarian until his death at age 81 in 1984.  He was President of the Club in 1953-54, awarded the Vocational Service Award in 1978, and made a Paul Harris Fellow in 1984.  Among his many Rotary activities also played a role in re-establishing Rotary in post war Japan.

Sir John was also involved with the Brotherhood of St Laurence and the Baker Institute. He supported or served on a variety of Boards including the ABC, Melbourne YMCA, Old Colonists Association of Victoria, the Royal Victorian Eye and Ear Hospital, the Walter and Eliza Hall Medical Research Institute, the Victorian College of the Arts, and the University of Melbourne Conservatorium of Music, to name a few.

In 1987, Rotary Melbourne introduced the Sir John Reid Community Service Award as a permanent memorial in recognition of Sir John’s commitment to the community.  The Award is made in recognition of an individual judged to have been devoted to community welfare for a lengthy period without remuneration. The recipient is presented with a citation and plaque commissioned by the Club and produced by sculptor Michael Meszaros.

In 2017, the John T Reid Charitable Trust, as a memorial to Sir John and Lady Reid’s legacy in service and philanthropic endeavours, awarded a $300,000 grant to Rotary Melbourne for the purpose of providing a financial gift of up to $10,000 to the not-for-profit organisation associated with the Award recipient. 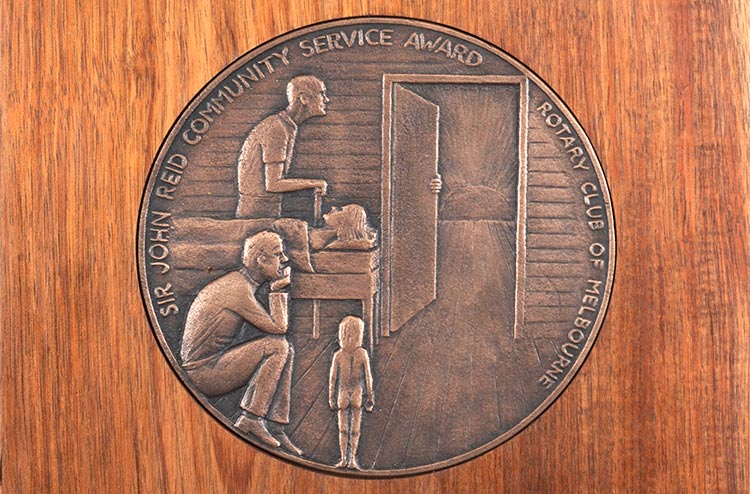 Award sculptor, Michael Meszaros, believes community service is largely concerned with helping the old, the young, the sick and the unemployed. People in these four categories are constrained and limited by their circumstances. The plaque design shows these four areas enclosed by a wall, but with an open door with perspective lines running out through it to a rising sun. The door has been opened by a hand which belongs to the recipient of the award.  The wall is the limitations, the door is the release from those limitations and the lines leading to the sun are the new opportunities. The hand makes it all happen. 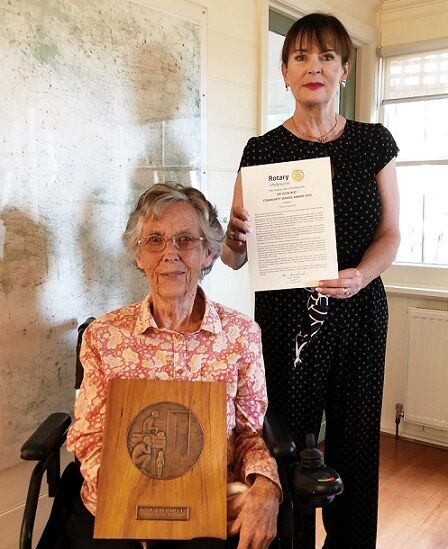 Rosie’s life has been one of service to the community with her career choice of nursing reflecting her care and concern for others. After volunteering in the Mercy Hospital Day Surgery Department, Rosie spent 11 years at the Kew and Hawthorn Citizens Advice Bureau. From 2004 to 2019 Rosie was a weekly volunteer at the Cabrini Malvern Day Oncology Unit. Rosie’s long record of volunteering makes her a most worthy recipient of Rotary Melbourne’s Sir John Reid Community Service Award. Her dedication to service above self truly reflects the values of Rotary.
View all Past Recipients (pdf download)

Please download all forms below and read them carefully
before you commence the nomination process.

For all enquiries, please contact Helen Moylan via email: h.moylan1956@gmail.com or the Rotary Melbourne Office.